Musings on Medicine and the Health Care System

This map shows every school shooting since December 14, 2012–the Sandy Hook Elementary School massacre. Don’t bother counting — there are 74. The only reason the map won’t break 100 in the next two months is that school is out for the summer.

Certainly, this is a moral issue. And a political issue. But first and foremost, the issue of gun control is a public health issue.

As the Johns Hopkins Center for Gun Policy and Research notes: “More than 31,000 people a year in the United States die from gunshot wounds. Because victims are disproportionately young, gun violence is one of the leading causes of premature mortality in the U.S. In addition to these deaths, in 2010, there were an estimated 337,960 non-fatal violent crimes committed with guns,2 and 73,505 persons treated in hospital emergency departments for non-fatal gunshot wounds.” Other fun facts from the Center: 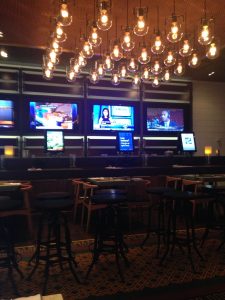 You see the photo to the left? That’s a shot of a restaurant in Terminal D at La Guardia airport. In fact, the entire terminal looks like that, with iPads at every seat in every restaurant as well as most of the tables in the waiting area. So this morning, I sat down for breakfast, browsed through the electronic menu, placed my order electronically, swiped my credit card, and waited for my baked eggs and coffee. No fuss. No muss.

Now, let’s imagine what it would be like if our doctors’ offices (and other healthcare facilities) were as technologically savvy.

A week before my annual physical, I get an alert from the app on my phone letting me know that an order for blood work has been sent to the lab, with a link to its web site. While I’m on the doctor’s office app, I update my personal information, including insurance (and email a scanned copy of my latest insurance card), make a couple of changes to my list of medications, and type in the reason for the visit and any concerns. 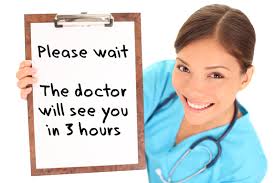 I’m writing this from the airport awaiting a flight to New York for a business meeting. My flight is delayed 90 minutes, but that’s ok, because before I even left for the airport I received two texts from Delta updating me on its status so I could time my departure accordingly.

Compare that to the friend I wrote about in yesterday’s blog. She waited more than two hours to see the doctor . Another friend spent an hour past her gyn appointment time in the waiting room, then another hour naked, in the cold examining room with only a paper gown for warmth, waiting to be seen.

If I took a poll of my readers, I guarantee 100 percent can share a similar experience. I, for one, have walked out after an hour. I now have a policy of walking out after 30 minutes unless the appointment is for an emergent issue or the office kindly slotted me in.

Yes, I know that doctors get behind schedule. I know emergencies happen. What I don’t understand is why, in today’s world of instantaneous communication , the office can’t send a text updating us … Continue Reading 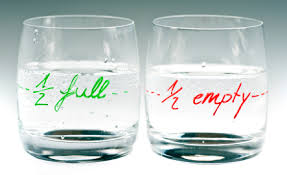 I’m dedicating today’s blog to my good friend and neighbor who has just spent what I would deem the weekend-from-hell-waiting-for-Monday. You see, what started last week as bad cramps and a feeling of bloating, with the likely diagnosis of ovarian cysts, has now morphed into a visit with a gyn-oncologist today. Very, very quickly. 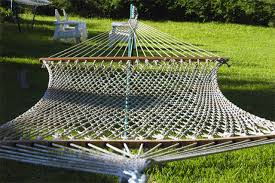 Coffee and  e-newspapers on the screened porch. An hour-long bike ride along country roads lined with wildflowers and cornfields, interspersed with glimpses of the Chesapeake Bay ending at a small sandy beach with a view of the Bay as far as the eye can see. A stroll through a farmer’s market with the dog. Lunch and a couple of glasses of wine at a local winery. A two-hour nap in the hammock. Cocktail hour on the dock. Dinner of wild goose breast (shot by  husband and son), snap peas, potatoes, turnips, and rutabagas picked from the garden that morning with husband, son, son’s girlfriend. Knitting and watching a movie. Bed.

That was my day yesterday (which explains why this blog is a day late [I’m participating in a 2014 FLX/WordCountBlogathon, so look for two blogs today]). At first glance, it might seen self indulgent. But let’s look at all the health benefits of my day.

My best friend’s daughter is pre-med in college. She’s brilliant, and is planning to become a developmental pediatrician (as of now, at least). By the time she enters medical school in two years, I really hope she learns not only anatomy and physiology, diagnosis, and how to insert a breathing tube, but how to consider the cost of the care she provides.

Residents have been required to learn how “incorporate considerations of cost awareness and risk-benefit analysis” in caring for patients since 2007, but how this is done is unclear. In addition, few medical schools provide any such training. Indeed, talking about cost in medical training has traditionally been tantamount to giving voice to “he-who-must-not-be-named.”

That is changing, as it must in a healthcare system that now makes up 18 percent of GDP, with costs typically rising far faster than inflation. As Molly Cooke, MD, wrote in a 2010 editorial in the New England Journal of Medicine, “We must be honest about the choices that we make every day and stop hiding behind the myth that every physician should and does … Continue Reading 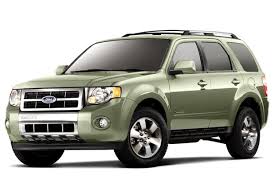 Just back from buying a new (well, 2-year-old) car (Ford Explorer, silvery green, all the bells and whistles and, get this, it even tells me how many miles I can drive given the amount of gas in the tank!). So forgive the short post, but, as most of you know, buying a car is downright exhausting (oh, and did I mention the two glasses of wine the husband and I drank to celebrate after?).

Yet here’s the thing. . . we bought our car at Car Max and I knew exactly how much that car was going to cost before I signed on the dotted line. I also knew the quality of the car (based on its history) and everything the car included (did I mention the rear camera and air conditioned seats?). The dealer also gave me a warranty — if something went wrong in 30 days, they would fix everything, no questions asked, no out-of-pocket payment on my part.

Let’s compare that to the CT scan I had a few weeks ago (and wrote about here). I had no idea what it would cost. Was given no opportunity to … Continue Reading

(If you’re wondering about the sudden flood of blogs. . I’m trying to blog every day for 30 days as part of a blogathon).

Picking up on yesterday’s blog about national health care in the United Kingdom, we now turn our attention to our northern neighbors in Canada. Where, we hear, residents are forced to flee their country and come to the land of the free and the brave in search of timely, quality medical care.

A 2002 study published in Health Affairs put that assumption to the test and found that relatively few come south and those that do usually have family in the states.

I think the researchers put it best:

“All of the evidence we have, however, indicates that the anecdotal reports of Medicare refugees from Canada are not the tip of a southbound iceberg,  but a small number of scattered  cubes. The cross border flow of care-seeking patients appears to be very small.”

“Indeed, the numbers found are so small as to be barely detectible relative to the use of care by Canadians at home.”

Oh, and from another study comes this finding about … Continue Reading

Labels:
health insurance healthcare reform healthcare system; Medicare
Follow me on Twitter
Read my Blog
Link to me on LinkedIn
Find me on Google+