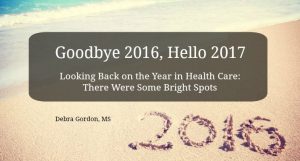 Gains Under the Affordable Care Act

More good news? I think I’ll have more than enough to write about in 2017.