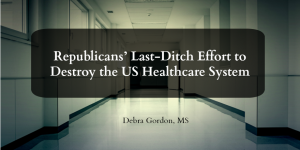 I haven’t written a blog in months because, to be honest, I simply don’t know where to start when it comes to what certain people are trying to do to our healthcare system.

But this time they’re going too far. I’m talking, of course, about the Graham-Cassidy-Heller-Johnson healthcare bill Republicans are trying to shove through the Senate before a September 30 deadline. After that date, they need a 2/3 vote to pass it, which means Democrats on board, which means no way in hell.

The New York Times editorial board nailed my feelings about this bill when it wrote: “It is hard to overstate the cruelty of the Graham-Cassidy bill.”

The Washington Post put it another way: “Another execrable health-care bill proves bad ideas never die.” And The Baltimore Sun, bless its heart, calls the proposal “even more draconian than their previous attempts to strip millions of Americans of health insurance coverage.”

How This Healthcare Bill Will Destroy Medicaid

Put simply, the bill would end all extra funding in 2020 for states that expanded their Medicaid programs under the ACA (note: 32 states and the District of Columbia expanded Medicaid. They cover about 14 million people and most are blue states). So right there states have to come up with billions to maintain coverage, or kick people off Medicaid.

Under this bill, the federal government, which currently shares the cost of (unexpanded) Medicaid programs with the states and provides subsidies to individuals to buy insurance on the ACA marketplace, would take all that money, mush it together, then divvy it up into 51 little pieces (aka, block grants) that they would parcel out to the states (DC) like jelly beans.

Their pathetic reasoning? The states are best prepared to decide how to manage health care within their own borders.

The thing is, states already do! Every state Medicaid system is different, with states having wide latitude to make changes and experiment with new models, benefit structures, cost sharing, etc. In addition, the ACA was originally designed to have the states manage the program with their own marketplaces; unfortunately, just 11 states and the District of Columbia chose to do that.

Giving a state a block grant and assuming it will use the money responsibly to provide affordable, quality health care for millions of its residents is like giving the homeless guy on the corner your credit card and assuming he will only buy a sandwich at Panera.

Not only that, but the bill changes the funding formula for Medicaid. Today it is funded based on approved expenditures; under this bill, it would be funded on a per capita basis, regardless of healthcare costs in communities, with the majority of increases pegged to overall inflation, not medical inflation (which is much higher).

Even worse is that the bill only guarantees block grant funding through 2026. After that, it’s up to Congress to re-appropriate the funds – and we all know how well that works.

But hey, it gets even worse!

An End to the Individual Mandate and Health Insurance Coverage Requirements

The bill also lets each state decide if it wants to protect people with pre-existing conditions or require coverage of things like maternity care, mental health services, and contraception. It will be a race to the bottom, people. After all, the states with the richest benefits will get the sickest people. No one wants that!

Oh, and one other fun fact? The bill also eliminates the requirement that employers with 50+ full-time employees offer health insurance. So if you get your health insurance through your employer, you better watch out.

What’s Worse, Congress is Moving Too Fast to Understand the Full Impact

The Republicans are moving so fast to push this bill through that there’s no time for the nonpartisan Congressional Budget Office to tell us how many people will lose health insurance and how much it will actually cost.

Luckily, a couple of healthcare entities had time to do some math. Consulting company Avalere estimates that the bill would reduce federal funding to states by $215 billion through 2026 and more than $4 trillion over a 20-year period.

The Kaiser Family Foundation estimates overall federal funding for coverage expansions and Medicaid would be $160 billion less than current law between 2020-2026. Thirty-five states plus the District of Columbia would face a loss of funding, nearly all of them states that expanded Medicaid. A typical Medicaid expansion state would see an 11 percent reduction in federal funds for coverage compared to an increase of 12 percent in a typical non-expansion state. One of the biggest winners? Mississippi. However, it also has the worst Medicaid system in the country, so it has nowhere to go but up.

Sure states can decide what they want healthcare for low- and middle-income residents to look like; they just won’t be able to afford it.

Was it just a week or two ago that we read about bipartisan efforts to strengthen the ACA and the individual market?

My, how time flies.