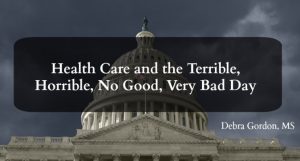 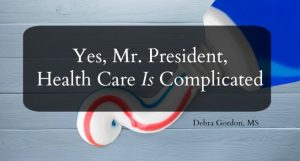 I have my own analogy to describe the US healthcare system. I think of it as a tube of toothpaste … Continue Reading 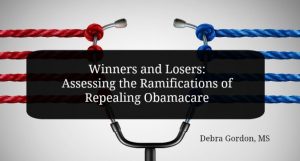 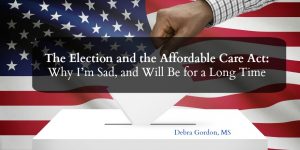 But, since I earn my living as a healthcare writer, the one I’m going to focus on here has to do with the almost-certain death of the … Continue Reading

We now interrupt our regularly scheduled programming to bring you a wonky blog post.

So a few people out there are suggesting that we privatize Medicare and give out vouchers for recipients to purchase their own insurance on the open market. This is such a bad idea for so many reasons, and shows that some people simply don’t understand how Medicare works. Here are my top five. . .

1. Medicare is the closest thing we have to a single payer system. Medicare covers one in seven Americans, 97 percent of those 65 and older., or 49 million Americans. In 2030, the number of Americans covered is expected to nearly double, with one out of five Americans covered.

This huge cohort of individuals provides enormous opportunities to test  new reimbursement and quality initiatives with a large cohort. In fact, Medicare is leading the country in many of these initiatives, including accountable care organizations, pay-for-performance options, DRGs for hospital reimbursement (which reimburses based on diagnosis, not on how many aspirin you get), and financial penalties for hospitals if patients with pneumonia, heart failure, or heart attacks are readmitted within 30 days. Those penalties are expanded to vascular surgeries/procedures in 2015.

I’m listening to the news at the tail end of a beautiful Friday afternoon and I am so angry I could spit. I just heard about the new budget plan passed by the House which calls for requiring Americans 65 and older to use “vouchers” to purchase private health insurance in 10 years and works to dismantle one of the most successful healthcare programs in the world — Medicare.

Yes, you heard me right, Medicare. Because the reality is that Medicare does a pretty decent job of covering core health care needs of a large component of American society and, because of its size, is the only health insurance program in the country that can literally change how medicine is practiced through its policies.

Yes, there is fraud and waste. But we are also getting better at reducing it. But to turn millions of older Americans loose onto the commercial health insurance market and expect it to translate into cost savings is one of the most ludicrous, ridiculous things I’ve heard in my more than 25 years of writing about health care in this country. Here are just a few reasons why:

1. Medicare beneficiaries already have the ability to … Continue Reading

Warning: This is one of those “policy” posts, so if you’re looking for pithy freelance medical writing verbiage, come back tomorrow.

If you’re still with me, you know that the Senate begins debate today on the healthcare insurance reform bill (apparently we’re no longer calling it “healthcare reform” because there’s still so far to go in terms of reforming the overweight, out-of-control, drunken healthcare system we’ve created over the past 50 years).

One of the big sticking points to getting a bill passed in the Senate, pundits say, will be the so-called “public option.” This component provides a bare bones, government-sponsored health plan, subsidized as needed based on income, to compete with private health insurance plans. The plan would be delivered by private insurers paid by the federal government. In the Senate plan, states would be able to opt out of it if they wanted. Nonpartisan estimates from the Congressional Budget Office show that just 4 to 6 million Americans would go for it. Oh, and it would save billions over 10 years. Yet based on the reaction from most Republicans and some Democrats, you’d think it was a proposal to cut off every American’s right arm!

Labels:
healthcare reform Medicare
Follow me on Twitter
Read my Blog
Link to me on LinkedIn
Find me on Google+